Home » Tech » The power of the sun 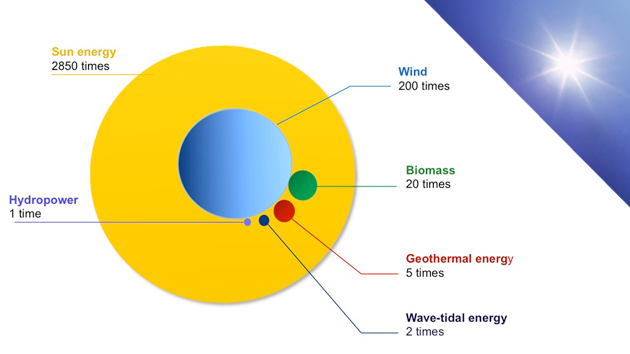 The power of the sun

The cheapest source of energy ever

Great energy potential from the sun

In just one day, the sunlight which reaches the earth produces enough energy to meet the current global power needs for eight years.

The picture clearly shows the amazing constant flow of energy that hits the surface of the earth from the sun. This represents about 3,000 times the total present day energy consumption of mankind on earth. This is a huge good news as you can imagine what could be the result if we were able to appropriately address the exploitation of this great potential by just taking a little bite on that.

Additionally, most clean and renewable energy sources originate directly or indirectly from the sun as the sun makes the wind blow, the waves go and the biomass grow.

Wind power and wave power depend on weather patterns that are caused by the sun’s energy. Sunlight is needed for the photosynthesis process which makes all sorts of plants – biomass – grow. If we were to exploit all the power of the wind blowing on the earth, this would represent about 200 times our total day energy consumption. Similarly, if we were to exploit all biomass related energy power available, this will nurture our planet 20 times its current consumption.

Hence, indirectly, the sun’s energy can be used to power wind turbines, hydro power and biomass systems as well. But the sun’s energy is also exploited for heating in solar thermal collectors or for electricity production in photovoltaic systems. Unfortunately, the vast majority of current sun energy converting systems still very much relies upon the use of silicon based photovoltaic panels, a rather old and very low efficient technology that, when used to produce electricity, disperses more than 80% of the received energy in heat on the air. But the research is moving fast by focusing on the utilization of a number of new basic materials, including nanotechnologies and bio-technologies, that aim at being cheaper, more efficient, and last but not least, environment friendly.

After all, it’s all about sun and we have all that for nothing!