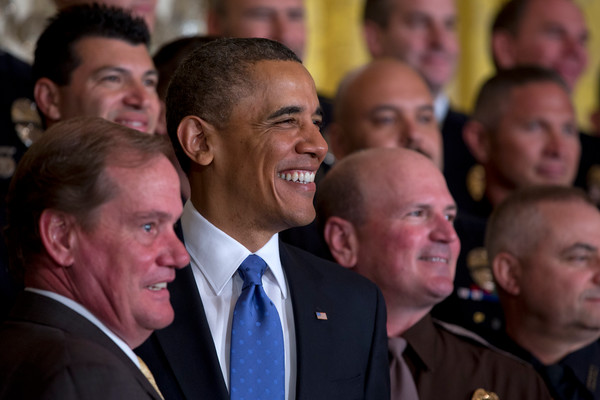 NYPD detective Ivan Marcano received a shout-out from Obama during the National Association of Police Organizations 2013 TOP COPS recognition ceremony. The president talked about how, while off duty, Marcano helped out a cabbie who was being robbed. He was out that night with his girlfriend, Hilda Miolan, who Obama said deserved ‘a really nice dinner.’

President Obama shakes Detective Ivan Marcano’s hand at ceremony. Marcano was out with his girlfriend when he spotted a cabbie being robbed and hopped into action to save him.

WASHINGTON — An impressed President Obama singled out courageous NYPD cop Ivan Marcano — and his surprised girlfriend — at a White House ceremony Saturday for heroic cops from around the country.

Marcano, one of two of the 43 officers honored Saturday who Obama cited by name, was off duty, driving through the Bronx with his girlfriend, Hilda Miolan, on Oct. 24 when he spotted two armed suspects robbing a 60-year-old cabbie.

When Marcano stopped and identified himself as a police officer, one suspect immediately opened fire, wounding the officer in the arm and chest, inches from his heart.

As Miolan, who Obama joked was probably “not very happy with” Marcano, drove him to the hospital, he saw the suspects and an accomplice. They had just crashed into a livery cab, jumped a curb on Burnside Ave. and ditched the car. Clutching his chest to keep pressure on his wound, Marcano jumped out of his car and approached them. As one, 18-year-old Prince James, reportedly fired again, Marcano, a righty shooting left-handed, fatally shot James in the head.

“He wasn’t on the clock when any of this happened,” Obama said. “This was his date night. It’s unbelievable.”

The President then asked Miolan to stand for applause.